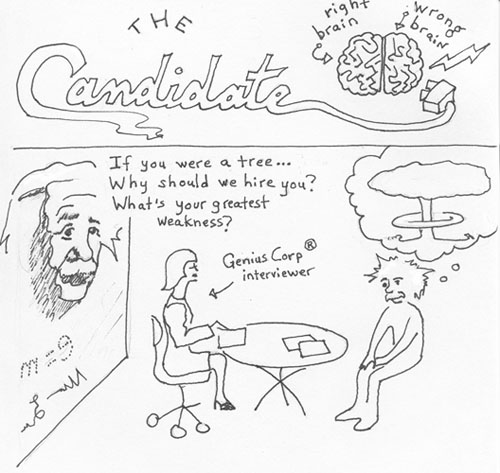 Question:
How can anyone celebrate genius when no one has time to do any actual thinking? We have so many team meetings that I hardly have time to get my work done, much less think about it.

Imagine a company with “genius” branding all over the place. Then, Albert Einstein himself comes in as a candidate for an interview. Maybe he fell through a time warp and still thinks it’s 1945.

Of course he’s old, strangely groomed, talks slow, thinks slow, is not a team player, doesn’t try to sell himself, can’t handle the rapid-fire interruptions and constant chiming of people’s texts, doesn’t know what a smart phone is. He’s bewildered by the whole interview process. Ironically, his picture’s right over the door of his interview chamber. This REALLY creeps him out but no one else seems to notice.

They start asking all these obnoxious interview questions, asking him brain teasers, pop psychology questions, asking him if he can juggle multiple priorities and wear many hats, etc. They tell him how great the company is, how much they value employees, and then say “Everyone starts out contract,” and he says, “You know, I’d rather be at Auschwitz. At least they were honest about their intentions.”