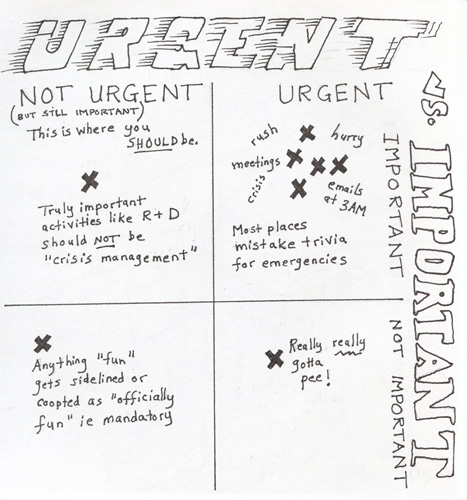 Question: Every day work is a non-stop barrage of interruptions where every single thing is “ultra mega hyper urgent”. This is stopping me from completing any deliverables at all. Plus I have no attention span. When I go home I’m too exhausted to even cook. It’s worrisome.

Answer:
A wise fellow once said to me, “Urgent is not the same as important.” Unless you’re in the ER, things should not be in a constant state of crisis. Crises can be addictive: the amped-up intensity becomes an end unto itself. A lot of companies rely on a manufactured sense of urgency as a form of speed to get their employees running ever faster on their little hamster wheels.

So here’s a little 4-way scatter chart, with binary vectors for Importance and Urgency.

Urgent just means something is time-sensitive. Imposing a deadline doesn’t make it significant. I think that a lot of work stress is caused by confusing urgency with importance, for things which are actually neither, or which are only important for about 10 seconds before being eclipsed by the next emergency. Pretty soon, nobody knows what’s important.

In ancient computer lingo, there were terms to describe orderly vs. disorderly processing: FIFO and LIFO. Your task list or “inbox” was a “stack” and an orderly way to process it was First In, First Out (FIFO). The contents of your inbox were known and you were in control of the order of execution, allowing you to organize your energies to crank things out with minimum downtime. This feels good!

If you are forced into a Last In First Out (LIFO) model, you have no control over your own work life, plus you’re constantly doing the human equivalent of swapping memory to disk. Yeah, I know, we’re all solid state in the cloud now, but still there’s a lot of lost downtime in swapping tasks. Even the cognitive scientists have noted, repeatedly, that it can take 20 minutes or more to resume an absorbing task after interruption. Plus it’s nerve-wracking. Doing this all day, every day, will suck the marrow from your bones.

A lot of people have LIFO syndrome due to some form of ADD, but I think that the modern workplace actually causes ADD because all the distractions prevent any form of deep thought.

So, go through this exercise with all your daily activities. Don’t omit anything, no matter how trivial. Include binge-watching of TV shows and Facebooking while at work. This is hard enough to do with work stuff. It’s even harder to do when looking at the bigger picture of your life. People put off important things (like spending time with their kids) to respond to work demands (emails at 3am) or compulsive distractions (hours of online gaming) and one day they may wake up to regret it.